Women making a difference in aviation for the Baltics

During the last few years several airlines in the Baltics have flourished, and they have brought with them a new generation of young and innovative talent to the region’s aviation industry.

This is frequently being supplied by young women, who are coming through the ranks to take up senior positions and are gaining industry authority to drive change. 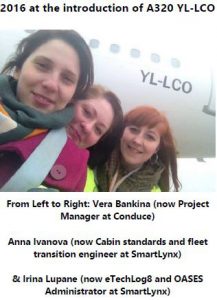 Often this is environmentally friendly change, with an emphasis on reducing waste and adopting efficient airline paperless operations.

This is being demonstrated at SmartLynx Airlines, where several initiatives have been pushed through.

In 2015 the SmartLynx directors encouraged Vera Bankina to take on the challenge of eliminating the cockpit paper log books. This was ultimately achieved by implementing eTechLog8, the Conduce Electronic Log Book (ELB).  Vera was aided and abetted by Irina Lupane, who at the time was in Technical Records and operating the Maintenance Information System (MIS), Commsoft OASES. Both Vera and Irina had previously worked together at Air Baltic where they had learned the ropes in Technical Records and using Commsoft OASES.

In the meantime, Irina has also come through the ranks and is now in charge of Technical Records and is the Administrator for Commsoft OASES at SmartLynx. Irina is also the SmartLynx eTechLog8 system Manager and is affectionately known within SmartLynx as eTechLog8 mama!  During the last 12 months Vera and Irina have been working together again, but this time to integrate eTechLog8 with Commsoft OASES.

They have brought together the three companies to stream the data flow from Conduce eTechLog8 in the cockpit electronically into OASES, without the need for paper or clerical intervention.

SmartLynx are now recognized as the pioneers of paperless technology in the Baltic states, adopting cutting edge solutions and enabling the airline to harvest the benefits of the digital age.

“This is another big development step for SmartLynx to increase fleet control and passenger safety.  We see increased access to information, transparency, time saving and reduced risk of human error. We have become the first airline in the Baltic States to introduce these processes, that will ultimately become the generally accepted aviation industry standard. We now observe that other Baltic airlines are also considering abandoning the old, time-consuming, paper-based log books.”

About Conduce: With offices in the UK and Australia, Conduce provide robust mobile solutions such as eTechLog8 for the worlds airline industry. eTechLog8 is the leading ELB solution to replace paper technical log books and is now certified by 10 NAA’s.  Full integration with most MIS/MRO back office airline systems is standard. (www.conduce.net)

About SmartLynx: Founded in 1992, SmartLynx is the second largest Latvian-based airline, providing charter flights and ACMI (Aircraft, Crew, Maintenance and Insurance) services.  Its fleet in 2019 is planned to be 26 Airbus A32X aircraft operated daily by more than 600 employees worldwide.  In 2018 SmartLynx had a turnover of €171.9 million representing a 30.72% increase compared to 2017.  In 2018 more then 3 million passenger were serviced on the flights provided by the company. (www.smartlynx.aero)

About Commsoft: Communications Software (Airline Systems) Limited has produced cutting edge software for aviation maintenance and engineering for over 35 years.  Commsoft produces a market leading product which is utilised in around 50 airline and maintenance organisations throughout the world. (www.commsoft.co.uk)